Fetch the Cost of Your Franchise Fee Back! 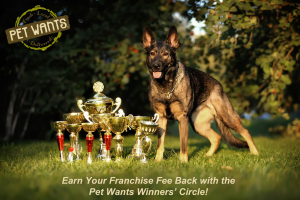 Think of every national chain you can. If you Google “[national chain] franchise opportunities”, most likely the overwhelming majority of the names you search would have a way for you to contact them about opening a franchise. But the price of admission for these great systems can be incredibly high – often hundreds of thousands of dollars – leaving most people out in the cold.

But at Pet Wants, we’ve fetched you a great opportunity. In addition to our relatively low franchise fee to begin with, we’ve found a way for you to earn it back – in its entirety! We call it the Winners’ Circle Program.

As stated above, we don’t make you jump through hoops like a lion of yesteryear’s circus. Our program is purely revenue-based. You were already planning on making money, right? Over the course of the first years of your business, you will have revenue goals, and you will be cut a check for some of your franchise fee, earning all of it back over the lifetime of the program.

But, ask the owner of any franchise system this question, and to a man they would say yes: if you could look into the future and see this person would be one of the pack leaders in terms of performance, would you let the franchise fee stand in the way? Every last one of them would say, “Of course not!” Well, at Pet Wants, we can’t see the future better than anyone else, but we are clever enough to reach back into the past and make the appropriate adjustments for the outcomes we hoped for. Contact us today, and Franchise Director will get in touch with you to tell you all about this special program.